We are now in week 4 of our winter season, over 200 matches have already taken place, but there’s still heaps more to go. League tables are starting to take shape as more results come in. Check out your current position online now. 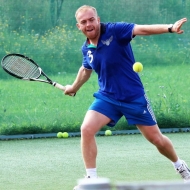 So many great matches, but our favourite is an absolute classic over in our Sydney Parramatta Tennis League, Paul Kang taking on Mike Dobrota (pictured) in division 1 in a three set thriller.

Paul edged a super close first set 6-7, but Mike wrestled back the momentum taking the second 6-2. A third-set tie break followed, with Mike winning the nail-biter 10-8!

“Paul has a very difficult game, controlling the ball very well, returning pretty much everything and slicing lots of balls making the ball bounce very little. Thanks for a great game.“  Mike 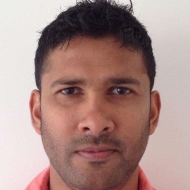 Our player of the week goes to Christopher Puthiaparampil (pictured), Christopher playing 4 and winning 4 over the past couple of weeks.

Our top league of the week goes to division 2 of our Perth North Tennis League. The group has got off to a flying start to the winter season, with 13 matches played already and 8 games completed in week 2 of our winter season.

Top effort from everyone in the group, especially Davide Boscolo, having completed 5 matches already and sitting at the top of the division so far. Still a long way to go!

“Great fun match, we both struggled to hold serve in the second set, Ati only held serve once or twice in the match, I had a pretty insane number of double faults on my serve, which made me hand over about 5 games, when they went in it was good tennis. Ati hits the ball really flat creating barely any bounce on the short balls so plenty of footwork was required to make most of his shots. Overall a good game, looking forward to playing with Ati in the future as he is progressing well for only a years worth of tennis, and he is a top bloke 🙂”  Timothy Byrne, Sydney Parramatta Tennis League

“Closer than the score indicates. I was very impressed by Ryan’s reflexes and ability to hit the ball early. Given that he has only been playing for about a year, he is going to become a strong player.” Damien Nowicki, Melbourne Inner City Tennis League

“Karen has come back from a couple of seasons off and it was like catching up with an old friend. She gave me a run for my money, some great rallies as per usual, thanks.” Susan Alexander, Perth North Tennis League

Enjoy week 4 and 5 of the winter season! Any questions please just get in contact, we’re here to help.