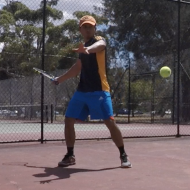 This week’s match of the week goes to Syahaz (pictured) vs Keith in division 1 our Adelaide Tennis League.

Syahaz went into this match unbeaten, having won 4 from 4, with Keith yet to get off the mark this season. A great match ensued, with Keith taking Syahaz all the way to the wire. Syahaz finally coming out on top 7-5, 4-6, 6-1.

“Great match! Was happy to take a set off the group leader but he was too strong in the end!” Keith

“It was a very interesting match. Keith is an absolutely drop shot master. He knows when to play his shots at the right time and execute it perfectly. He is very friendly and positive in character. It was really a pleasure to play a match against him.” Syahaz

Brilliant match both! Who knows…maybe a rematch in the grand final awaits.

Our player of the week this week is Jarrad Braham. Jarrad played 3 matches last week, winning all three and putting himself right back in the mix for a grand final spot. Jarrad hasn’t had it easy, with all three games going the distance! First up he beat Mark 2-6, 6-4, 6-4, he followed this up with a 2-5, 7-6, 6-4 victory vs Renate and finished the week with a 6-7, 6-2, 6-4 win against Mussa. That’s a whole lot of tennis!

Great tennis Jarrad and best of luck for the rest of the season!

“In a league that has so many really nice guys Alex has to be one of the best. Always a player I look forward to playing as he is a good player and always smiling. The game fell my way today but a point here or there and Alex would have won. Even though I’m going to have sore legs and feet tomorrow I’m already looking forward to our next encounter. Good luck with the rest of the season.” David Mckelvie, Perth North Tennis League

“Wow, what an epic match! 3+ hours, countless deuces and so much fun! I started the match well and was able to take the first set 6-2, although that score doesn’t reflect the battle that it already was at that stage. I was down 1-4 in the second set, but then managed to win the next 4 games and next thing I knew I had match points. I had 4 or 5 of them, in fact, but just wasn’t able to convert. Things went to 5 all, then 6 all, then Jarrad took the tie break and the second set. I was up 2-0 in the 3rd set, then Jarrad won 4 games in a row and I found myself down 2-4. Managed to even out the score to 4 all, but Jarrad won the next two games and the match. Quite painful for me to have lost the match after having had match points in the second set, but I thoroughly enjoyed this match and good on Jarrad for making such an amazing come-back! Great match, super exciting, hope to play Jarrad again soon! :)” Renate Smitham, Adelaide East Tennis League

” Cheng was fantastic opponent, it was evenly matched throughout the night, I had a few lucky shots in the end to close it out. Cheng was super friendly. What an excellent match, we both enjoyed a lot.” Tu Pham, Perth North Tennis League

Enjoy week 6 & 7 of the spring season, see you on the court!