We are now in week 4 of our autumn season, over 200 matches have already taken place, but there’s still heaps more to go. League tables are starting to take shape as more results come in. Check out your current position online now. 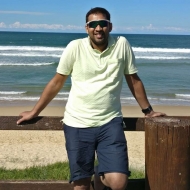 Match(es) of the week

So many great matches, we’ve picked two. First up, an absolute classic over in our Sydney Parramatta Tennis League, Manish Alse (pictured) playing Joseph Chu in division 2 in a three set thriller.

With Manish taking the first set 7-5 and Joseph edging the second 6-7, the game went to a champions tie-break to decide the third set. Manish got on top and took out the match 10-4.

“It was an absolute cliffhanger! Not till the last point was played did we both believe that we could win. Joseph has a solid game and was unfortunate not to win today as the lady luck was not on his side with his broken strings in the third game and plenty of net chords going against him. All in all was a fun game of tennis and am sure Joseph will be a good contender for the finals this season.“  Manish

Next up, Marlon played Jeremy Harper in division 3 of our Perth North Tennis League. These two battled out three of the tightest sets, with two tie-breaks required to seperate them, 7-5, 6-7, 7-6.

“A very close match all the way! Could have gone either way but a well deserved win to Marlon who got over the line in a close tie breaker game to decide the winner.“  Jeremy

Our top league of the week goes to division 2 of our Sydney Inner West Tennis League. The group has got off to a flying start to the autumn season, with 18 matches played already and 8 games completed in week 3 of our autumn season.

Top effort from everyone in the group, especially Matte Rochford, having completed 7 matches and a big shout to Shin Choi for playing 4, winning 4 and sitting at the top of the division so far. Still a long way to go!

“Had a great game with Matte. He is a real competitor. Really kind of him to invite me to his home court at Marrickville. Fantastic weather, nice bar alongside the courts and the footy ground nearby contributed to a great spectacle. We had some nice rallies and played tried to play consistent tennis than glory shots. Well played Matte. Would love to play again soon.”  Lalit Pant, Sydney Inner West Tennis League

“Is one of the best player’s that I have ever played in my life. Very consistent. I missed my big chance in the second set but I’m really happy because I enjoyed very much! Nice work Alex!” Gianvito D’Onghia, Sydney Central Tennis League

“Another great match just like last season. Daniel once again hammered me in the 1st set by 6 games to 1. The next two sets were close with a few points (and some lucky shots by me) the difference at the end. Thanks for the game. Looking forward to the next one.” David McKelvie, Perth North Tennis League

Enjoy week 4 and 5 of the autumn season! Any questions please just get in contact, we’re here to help.